“THEN, ONCE IN VIA CAVANA, I HAD TO SLOW DOWN DUE TO CROWD WHICH WAS BLOCKING THE NARROW STREET” (Italo Svevo, Zeno's conscience”, 1923)

The building was built between 1790 and 1800. During the course of its history it has had many owners, among which Baroness Angiolina Sartorio, from a noble family of the city's aristocracy, and her husband Heinrich Ritter de Zàhony, the son of a wealthy industry man from Gorizia.

On April 25th, 1846 the two married; the marriage was celebrated in the villa Carolina in Montebello, but the blessing was only bestowed later by the father Giovanni Guglielmo Sartorio, because the parish priest refused due to the husband being a protestant. On April 2nd, 1855 Angiolina Sartorio inherited part of the building, and in 1874 she became the only owner. After the marriage the couple lived happily in Gorizia.

In Trieste Angiolina lived in the Dogana (customs) building, now Piazza Vittorio Veneto, where at the end of the 19th century the building appeared that now hosts the headquarters of the Province.

She was a big benefactor, and she contributed with donations to various charity institutions. A widow from 1903, she died some years later in 1910 in Gorizia, where a street in the center bears her name. 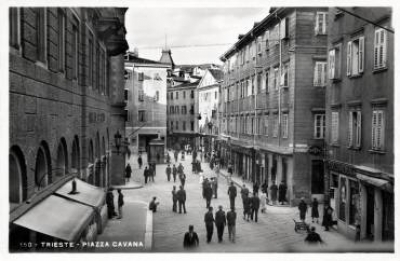